When we moved into our house a year and a half ago, tall trees grew between our house and that of our closest neighbors, providing an effective privacy screen. At the time, we were unsure on whose property the trees grew but later discovered that they belonged to our neighbors. Sadly, the trees had outgrown their spot, and the neighbors wanted to replace the trees with a fence.

Below is the old view of our neighbors' property blocked by the trees. 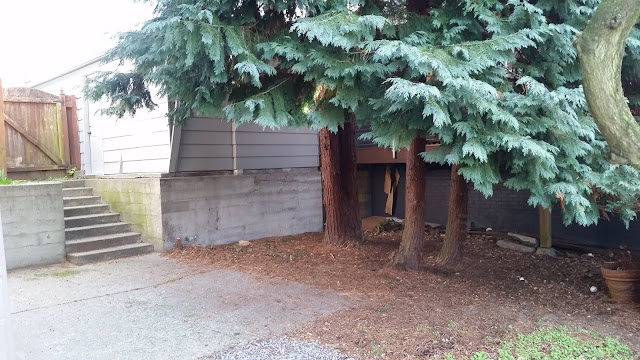 The same spot, after the tree felling (wish I had taken a photo of this process) and as the fence was being constructed.
In addition to cutting the trees between the houses, the neighbors also cleared a holly tree and some huge lilacs that provided privacy further along the lot line, making our garden feel very exposed to the neighbors' deck on the right. 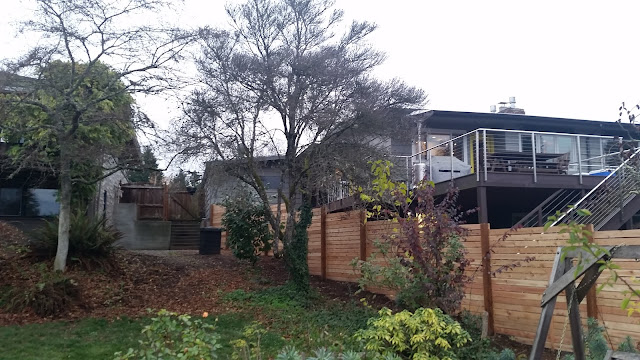 After much research, we settled on planting bamboo for privacy, beginning at roughly the corner of the neighbors' deck and continuing along the entire fence line to the left, a 50-ft span. To prevent the bamboo from escaping under the fence, we spent late November through early January digging a 26" deep trench the entire length and installed 30" 80 mm-thick barrier. Thankfully, this has been a relatively warm and dry winter.

Yesterday, we finally removed the last of the tree roots between the houses, amended the soil, and planted the upper 25 ft of bamboo. The bamboo is Pseudosasa japonica, a reportedly tame running bamboo that should grow to about 15 ft, which I hope it does quickly. The light-color mulch at the front is a pruning trench. 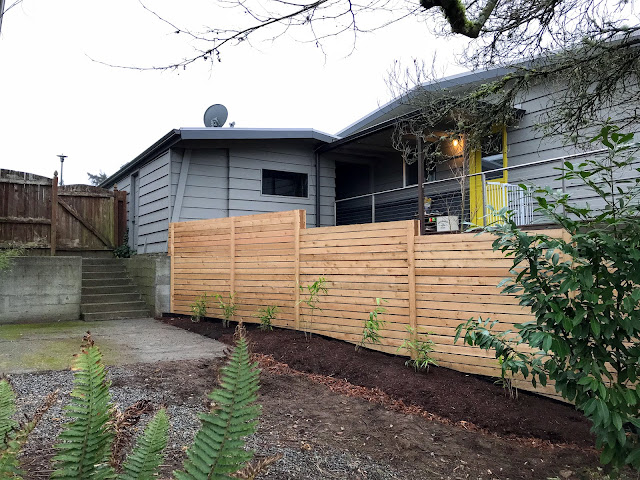 The remaining lower 25 ft is sunnier and will be planted with a clumping bamboo, Chusquea culeou 'Aisen 2' seedlings. Hopefully, I will be able to update on the completion of that section soon
at January 22, 2019
Email ThisBlogThis!Share to TwitterShare to FacebookShare to Pinterest
Labels: Bamboo, Hedges, My garden, Projects